Bin Laden and the Golden Gate Bridge: a Thankful Rememberance

To Scott and Karen Kalkowski, who can confirm the following conversation took place

On this day last year, I was in the car with my uncle and aunt, and we began discussing Osama Bin Laden, speculating that it was completely possible that he was comfortably somewhere. I made the point that wherever Bin Laden was hiding, it would easy for him to get government officials to conceal his presence. After all, he was practically a god to certain Muslims, who would consider it an honor to protect and give their lives for him.

When I heard the news of bin Laden’s death came across the news wire (I heard it first on the Phillies-Mets on Sunday Night Baseball), our conversation became pretty ironic. 9/11 was my senior year of high school, so to see the greatest piece of justice for that finally happen brings me to a certain sense of completion.

The next day, I headed into San Francisco, on the BART, as it would be the second to last day I would spend  in the city. I wondered if I would see the street vendors at end of market street selling special patriotic T-shirts or hear people randomly chanting “USA” in the streets. I saw none of that; it was Monday.

I went about the day as I had planned it. I visited the Cable Car Museum, and at lunch at a great sandwich/espresso shop across the street. I wandered around Chinatown and the surrounding shopping district, and bought up some last-minute foods I’d wanted to take with me. Then I caught the bus to the west end of town, because I wanted to visit China Beach (it sounded cool in my head). It wasn’t as spectacular as I thought it would be, so I simply took some pictures of the Golden Gate Bridge and watched the ships as they came and went. 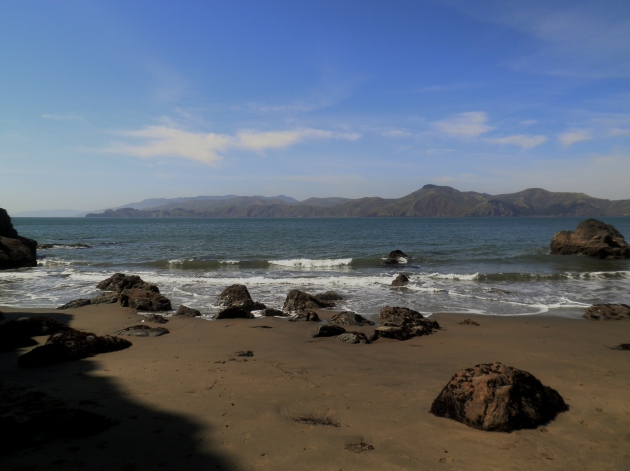 Time passed, and I made me way through the ritzy neighborhood of the north shore, aiming to find a bus station. I just wandered up to Baker Beach, and took some more photos as the sun lowered itself in the sky. The falling sun burns the most unique shade of white in both the Pacific waters and the sky itself. It’s part of what makes California so intoxicating.

Observing the Golden Gate Bridge, as I had from many angles in the city since I’d come, has a sad quality to it, especially on a day like today. The wear that TV shot clear up is quite evident. The Bridge itself was, when it was constructed, a feat of engineering that was unmatched. As a Nebraskan, the completion of the transcontinental railroad was our high point in our contributions to the great structures of the world. I’m glad the Californians who built the railroad with us kept trying.

But today, I could get the image of a plane crashing into one of the towers of the Bridge out of my head. I know, I shouldn’t get jumpy just because officials had raised the alert levels because of the possibility of retaliation attacks, but here and now I had to think of it. I am the 9/11 generation, after all. 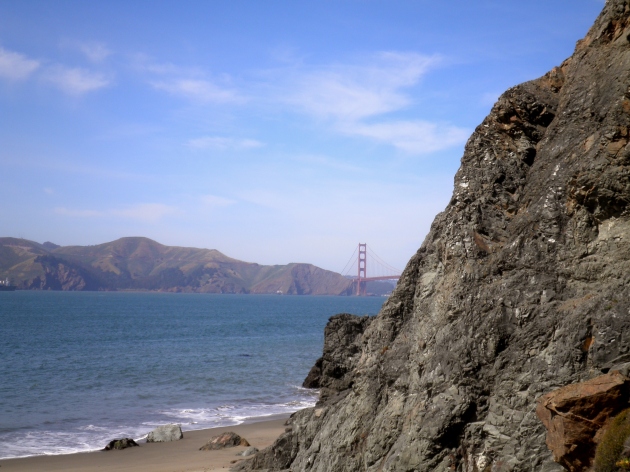 The Golden Gate Bridge is a beautiful structure, but it won’t stand forever. Even if we don’t live to see its end, we should be mindful that monuments are just that: memory sticks to a moment in time. We should be grateful for the time we get with them whether it be fifty years or five hundred.