Road Notes: Off the Grid in Western Kentucky/Tennessee

Leave a comment Posted by Derek Johnson on August 26, 2014

Last week I went to Tennessee. I was disappointed when I started passing a bunch of cornfields and the region started to look like Nebraska.

Seriously though it was a great break from my usual criss-crossing through Midwest power lines and family restaurants to go through quaint southern junk yards and vine overgrowth. Okay, seriously, the region of the Missouri bootheel/western Tennessee and Kentucky has a lot of nice homes, logging mills (never seen one of those before) and stretches of road that mostly go straight. And even though they don’t get snow and have six Pentecostal churches per town of 1,500, it feels just as familiar as any other part of the country I go to.

This time, Cairo, Illinois seemed even more rundown than the other two times I’ve been through there. It’s the only town under 5,000 I’ve ever been to that I’ve feared for my safety. My grower told me virtually the entire town is on welfare, words that rang through my head as I drove through town, expecting someone to jump out of an abandoned building with a gun. Of the five people I saw on the street, I wouldn’t have been surprised if any of them used drugs. As many hurting towns as I’ve seen, this is one is as sad as I’ve ever seen.

Trees along the Ohio River

It’s been a good year in the fields. Some of my fields have been average, but I haven’t had a field that flopped or massively underachieved. I was overjoyed to be counting the pods on the plants and sending yield estimates to my father. Harvest may still be six weeks away, but the majority of my miles are behind me. Get your 2015 orders in. 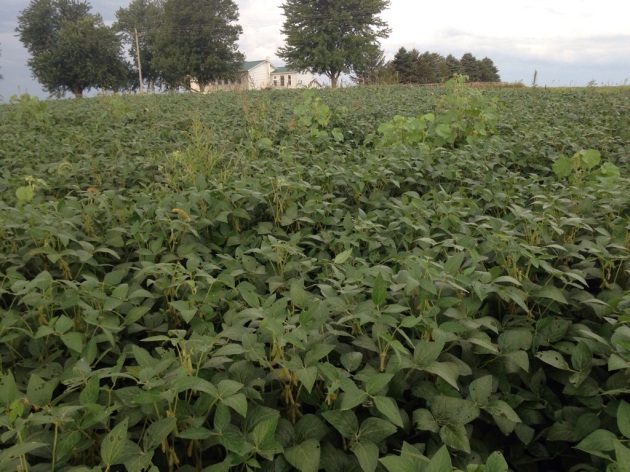