Trade Up…Down…Does it Really Matter? Belichick, and 31 Other Mad Organizations Vying to be Right

There were two events that made trading down in the NFL draft popular. First, there was Jimmy Johnson’s trade of Hershel Walker for a bevy of picks that rebuilt the Cowboys in a hurry, and Bill Belichick’s winning Super Bowls with lesser round players shot the practice. The latter’s mastery probably helped increase the popularity of the whole draft, but when Belichick started to started to pile up late-round picks while the talent on his team dwindled, it calls into question the real value of trading down. 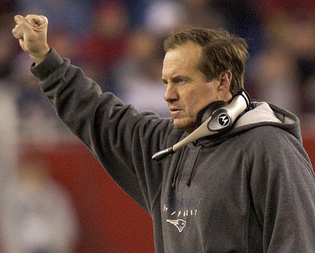 Whether or not a team should trade up or not depends on how good their roster is. Last year, Atlanta could afford to move up and take Julio Jones because they had a good quarterback and had drafted well for three years. Belichick may have scolded his former understudy, Falcons GM Thomas Dimitroff for throwing his draft at a receiver, and granted, Atlanta might have been better off taking a pass rusher. But Dimitroff’s move has good precedent: in 2007, San Diego GM AJ Smith traded four picks to get safety Eric Weddle high in the second round, because he knew Weddle could make their team coming off a 14-2 season. The best player that the Bears got with those picks was running back Garrett Wolfe, who provided four average seasons before exiting for the UFL.

Belichick’s drafting is even stranger when you see why he’s loosing Super Bowls. The teams that beat him, the Giants, do so because they are getting raw, athletic pass rushers at the top of the draft, and where even once labeled as having the worst draft in 2006 when they took Matthias Kiwanuka when they already had two good pass rushing ends, Michael Strahan and Osi Umenyiora. But Belichick goes out and continues to draft defensive backs high in the draft, and with all those defensive backs, he still had to have a wide receiver (Julian Edelman) play corner in the playoffs last year. Sure everyone plays the spread, but the Giants showed Belichick personally that if you can sack the quarterback, your back seven fills itself out.

The Giants, in fact, of why you want to trade up: getting a player (and fore-mostly, a quarterback) who changes your future. And ironically, the Chargers had to trade Eli Manning to the Giants but still got a franchise quarterback (Phillip Rivers), a good kicker (Nate Kaeding), and an outstanding pass rusher for the length of a contract (Shawn Merriman). So at times, trading back has it upside. The Brown wish they could say the same when they trade out of the Mark Sanchez pick, Alex Mack, an All-Pro center, is the only player from that trade on the Browns roster. However, two of the experienced players, safety Abram Elam and defensive end Kenyon Coleman, were serviceable starters who became expandable when the Browns changed coaches and switched from a 3-4 to a 4-3.

There is another paradox I’ve noticed in such mega-draft choices, and that is the blossoming of players acquire with seemingly insignificant draft choices traded with two super-stars. Peter King wrote about this when he reviewed the 2008 Jared Allen trade from Kansas City to Minnesota a year after the trade. The Chiefs netted a first-round pick, two thirds, and a sixth. King speculated at the time that Brad Sullivan, a player the Vikings took with a sixth round pick the Chiefs threw in, would be as good as anyone of the players that the Chiefs had picked. Ultimately, the two players the Chiefs drafted with those picks worked out: left tackle Brandon Albert and running back Jamaal Charles, but clearly, the Vikings didn’t lose any sleep. Similarily, Josh McDaniels handed the Bears a fifth round pick in the Jay Cutler trade that would yield John Knox, a reliable forty-catches-a-year, downfield threat. Obviously, it helped both Knox and Sullivan that they came onto teams that had few draft choices and thus more opportunity to make the roster.

A team’s draft is merely a reflection of how good their front office is. The Lions picked at the top of the draft for years and came up with nothing, while the Colts kept picking pro bowlers at the end of the first round. Pray your organization hires a good GM and coach, and drafts a good quarterback. As long as you hit a first-rounder every year for about four or five years, hit seventy-five percent in rounds two and three, you just need one year where you get a couple of solid players in the later rounds, which is exactly the kind of year the giants had last year. And then hope your great coach doesn’t turn senile.