The Walking Dead Underachieves Because of Its Radical Nihilism (Spoiler Warning!)

(Warning: This post contains spoilers through Episode 4×14 of The Walking Dead. Proceed at your own risk.)

Right now, The Walking Dead is my favorite show on TV, which sucks because of how disappointing the show can be. Don’t get me wrong, the zombies are terrifying and the action scenes are creative and captivating, but I just can’t stand the people moping around when they are on the verge of running out of food. What would make the show better is a dose of conservative ideology.

The Walking Dead underachieves is because it’s a wildly liberal/nihilistic show, embracing the motto, in the long run, we’re all dead. Whatever satisfies you now, do it. Which works great, in the modern American world of 7-11’s and mass convenience. When you put that philosophy into practice in a world full of flesh-eating zombies (as TWD tries to do every week), at some point, the characters become unsympathetic, because there’s so little pleasure in the world. If you live for pleasure in the zombie-apocalypse, why don’t you walk into the arms of the biters?

Season 4’s second half demonstrates how dumb this philosophy is. Rick and the counsel would have plan ready if they had to suddenly abandon the prison, like bags that were ready to fill with food, and a place to met on the outside (and getting to this specific, predetermined place could have been the major arc of the second half of the season). Remember how Glenn slept on the broken bridge through the night after the Governor’s attack? The prison was intact enough that they would have time to go to the kitchen and gather supplies before they left.

Instead, the characters run off into the woods and scavenge houses and eateries for food. Hadn’t they picked the area clean when they were on the road a year ago, at the beginning of season 3? The world went to hell, but it’s as if the McDonald’s never closed.

This roaming-in-circles, Cheese-Wiz-from-the-sky attitude is because Hollywood holds luck, not hard or planning, as the main arbiter of success and failure in life. The belief in the supremacy of lucks leads to a belief that personal actions are not important, and at some point, there’s no point in watching people whining over their personal autonomy being violating. (Like Maggie in Episode 4×13, for example.)

There’s a simple conservative ideology that could fix this: building for the future. Things may look bleak, but we have inalienable rights steaming for our creator, however we define him, and we have to preserve our society. To those who want to keep ideologies off television, I’d say this: this is a mild conservative ideology that would make the show mostly apolitical, and if you want to watch more liberal TV, you have unending options. No one says you still can’t have a couple pessimistic characters to balance things out.

I do have a glimmer of hope that The Walking Dead will get better, and that has to do with the one arc that I have found interesting in the second half of this season, the Daryl-Beth story. I know fans tend to complain about Beth (seriously, fans of guy shows hate woman as a general principal it seems), but Beth got Daryl to be more optimistic and to open up. If this season ends with Daryl saving Beth and becoming a more purposed character, that could be a great arc into the next season. But given how this show likes to play ball, I’m guessing that Beth is going to be killed, and her death is somehow going to motivate Daryl to be more of a leader. While the latter scenario would be ideologically consistent, it would do the impossible: it would make The Walking Dead even more nihilistic. But at least I might be able to give up the show then.

(For more on TWD‘s ideological issues, check out this post from The Federalist.) 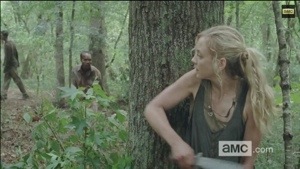 Oh Beth, if You Were Only on Hart of Dixie