Straight from the Cornfield, Episode 19

Leave a comment Posted by Derek Johnson on November 12, 2015

In this episode, I preview the upcoming Nebraska men’s basketball season, weighing what expectations should be for this team and what should be expected from the Huskers’ newcomers. Spoiler: this looks like Shavon Shields’ team. 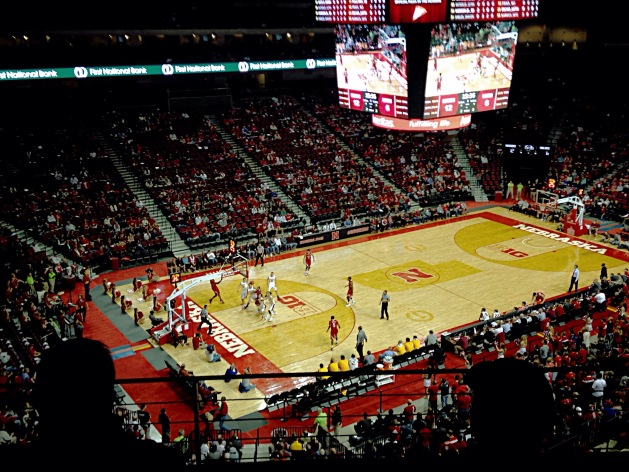 Tim Miles: At Least He Looks the Part

Saturday I awoke to see one of my Facebook friends had already bemoaned another stint of Nebrasketball irrelevance because of the hiring of Tim Miles as Nebraska’s men’s basketball coach. While he’s not a wow-hire, Miles has  two qualities that give a chance to succeed at Nebraska: one, he has a recruiter/spokesman’s personality, and two, he’ll recruit and sign Nebraska high school players.

To the first point, Doc Sadler didn’t work as an AQ-conference coach was because he was from the Bobby Knight-John Thompson red-faced -yelling sschool. Great players didn’t want to play for him, and the players who did come to Nebraska didn’t stay here very long. Miles is a young, bright media face who tweets during halftime. While he might not be able to sign a bunch of McDonald’s All-Americans, Miles should give Nebraska a positive voice that isn’t hoarse from screaming and wears on players like John Gruden’s did.

Osborne with his new protege.

To the second point, the fact that Miles had four Nebraska natives on his current CSU team  must have been impressive to Osborne, maybe more so than it should have been. Miles is a South Dakota native who spent most of his career coaching in the Dakotas and Minnesota. While Nebraska doesn’t produce a lot of D-I players, keeping the few will do go a long in endearing Miles to the Nebraska fans. Look at this way: if you sign the T.J. Pughs and Wes Eikmeier of rural Nebraska instead of letting them go to Iowa State or Kansas, then at least Nebraska fans will come and support them. Barry Collier had worse record at Nebraska than Doc Sadler did, but was kept after his sixth year while Sadler was fired. The reason: Collier recruited a bunch of local players his first year at Nebraska, endearing him to the locals. If you’re going to serve a bad basketball product, at least buy it locally.

But Nebraska’s inability to hire a great basketball coach stems from the fact that there’s no urgency to win in college basketball, even at major programs. Look at Maryland and Missouri, the two best jobs that opened last year. Missouri hired a coach had been to the NCAA Tournament once and hadn’t won sixty percent of his games at Miami (Frank Haith). Maryland, in a basketball-first league, hired a coach who had been to the Sweet Sixteen once at a mid-major (Mark Turgeon). Given Nebraska’s lack of interest in basketball for the last twelve years, Miles may be the best hire they can get. Even coaching at the school where a long-time Osborne aid is the football coach, Ohio coach John Groce may have his sights set on a bigger job, like Illinois.

In the video below, Miles talks a lot about something that many Nebraska beat writers have been pointing out about Nebraska basketball: raising the standards of a program. Colorado State had finished no better than sixth in the Mountain West the previous seven year before Miles arrived at CSU. Miles had just two scholarship players on his first team but improved every year. At North Dakota State, Miles upset both Wisconsin and Marquette after the school jumped to Division I, and Miles’ players continued to win after their coach left. Maybe Nebraska has found a coach who’s peaking; either way, it’s a better resume than Sadler had when he came to Nebraska (two years, one NCAA bid, one NIT bid, with Billy Gillispie’s players), and everyone supposedly loved him.

I’m not going to say that I’m uber-thrilled with Miles’ hiring at Nebraska, but I am going to watch his introduction today with some optimism. As long as he can recruit local players and there aren’t too many empty seats at Pinnacle Bank areana(or worse, Creighton fans), it will justify a six year tenure, which is what Osborne is going to give a coach if he makes the postseason by year three. When Sadler was named the Nebraska men’s basketball coach, he brought a combative bravado that wore thin over time. Miles looks like a long-term, positive builder, which is exactly what Nebraska needs.

Update: In his introductory presser, I thought Miles came across very well as the fresh-faced CEO that Nebraska basketball needs. He talked very postively about creating buzz within the fanbase, exactly what Nebrasketball needs to succeed (and fill the new arena.) I had forgotten the North Dakota State connection with Craig Bohl that undoubtedly helped him land the job.

Unfortunately, he didn’t seem very eager to talk about recruiting Nebraska when he was asked about recruiting, instead speaking of the Big 10 and old Big 12 north footprint. Hopefully, he will maintain his old connections and sign local prospects, but I wish someone would have asked him about the Nebraskans he had at CSU.

One last carp: why in the world did we have to hear so much about Doc Sadler? Clearly, everyone cares about him more now that he is gone than when his teams took the court.